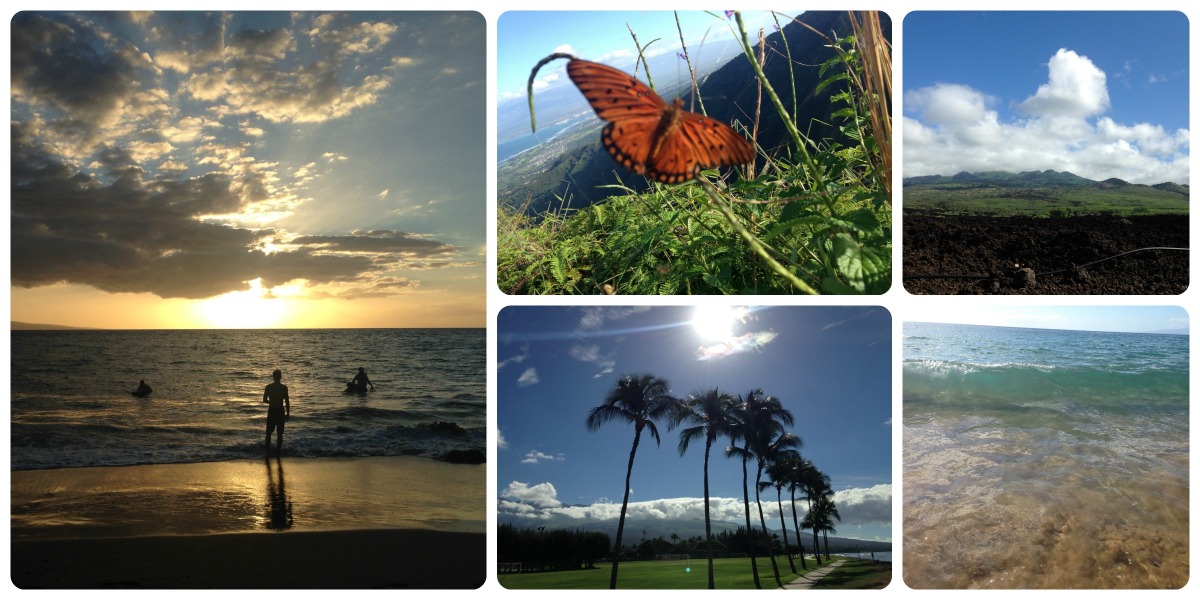 For the Openhearted (& Frugal) Traveler

You travel with an open mind and open heart.
You are willing to experience a place as it is.
You think all inclusive travel packages are for wussies.
You are annoyed by hordes of tourists demanding to have a good time while tromping over local culture.
You prefer the side roads and local foods to tourist traps.
You aren’t made of money and low budget / high experience is your ideal travel plan.
You have respect for the people and places you visit.

This guide is written for you.

Aloha! Maui is called The Valley Isle and it’s verdant beauty and relaxed atmosphere make it a wonderful place for both respite and adventure.  Maui has plenty of beach, jungle and volcanoes so be ready to spend most of your time outside.    People are generally, warm and friendly  – they live in paradise after all and community is at the center of life on the islands.  If you are invited by a local to their home or an event, consider this a great compliment and go!  Embrace aloha and you will enjoy your stay for sure.

END_OF_DOCUMENT_TOKEN_TO_BE_REPLACED

The group that I paddle with out of the Kalepolepo Fishpond in Kihei recently added a new wa’a (Hawaiian outrigger canoe) to our fleet and a traditional Hawaiian blessing ceremony took place before her maiden voyage.   The crew, friends and visitors were all invited to participate in the ceremony presided by Kimokeo Kapahulehua (aka Uncle Kimokeo).  Kimokeo is passionate about teaching and preserving native Hawaiian culture. Check out his foundation here http://kimokeo.org/

On February 25th of 2017, Kimokeo lead some 45+ people in the ceremony which included, chanting, clapping, an ‘awa ceremony (‘awa or kava is a bitter root drink which is often seen in ceremonial protocol throughout the Pacific).   We all wore lei made of ti leaves and dressed in traditional kiheis (think a short toga). 6 people were chosen to take the wa’a out on her first trip to sea as a part of the blessing.

I’ll break it down phonetically for my fellow Hawaiian language newbies:

The word for word translation is:

Na Kapuna = The Ancient Ones (Ancestors)

O ke Kai = Over All the Seawater

Since Hawaiian is a very contextual language, here’s my rough translation: The Ancestors of great abundance over all the ocean water.  (Moana is Ocean, Kai is the sea or ocean water specifically).

Now to the good stuff!  Photos and Video

After the blessing, the Na Kapuna (for short) was carried on our shoulders into the water. (Dat buggah is about 500 lbs!). 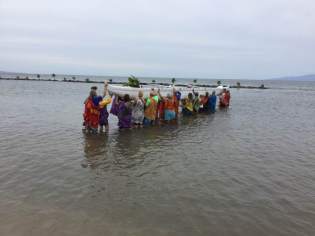 Double hull canoes launched ahead of the Na Kapuna.  Mahalo to our friends at Kihei Canoe club for lending us their double hulls!

The Na Kapuna and her crew leave the fishpond for the open sea.  The double hull canoes circle around the Na Kapuna.

Mahalo nui loa to Uncle Kimokeo, Auntie Ryn and everyone who made this a beautiful ceremony.  I was honored to be a part of it! 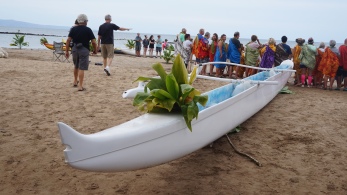 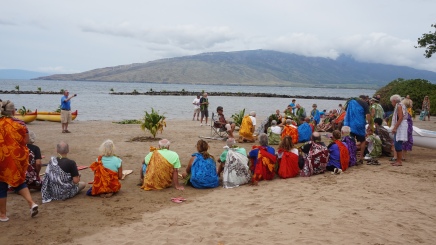 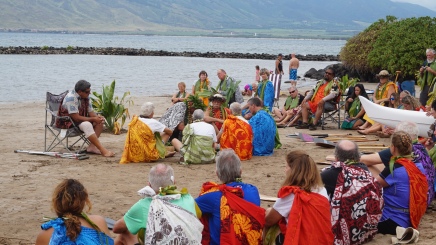 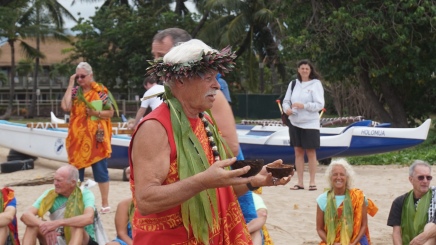 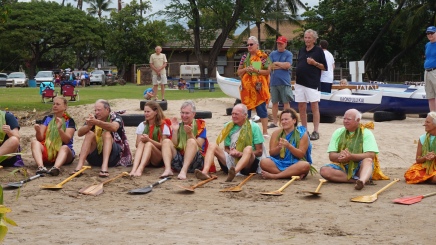 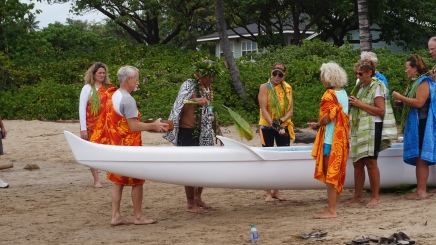 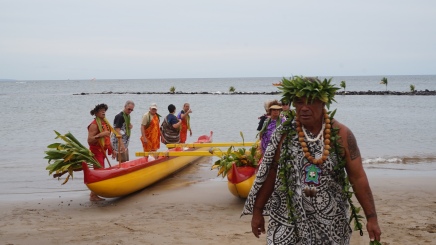 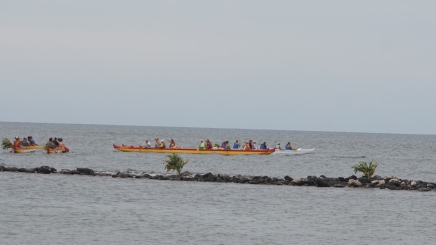 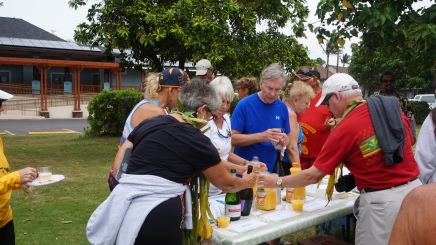 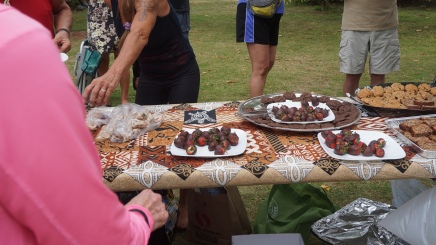 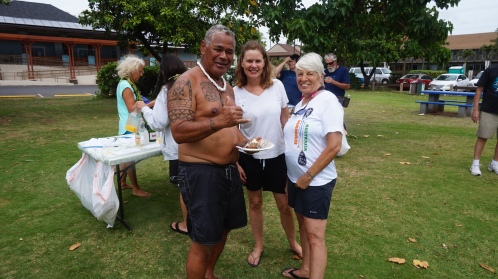 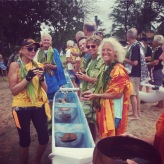 PS:  I was so very happy and honored to be chosen for the Na Kapuna’s first crew!  I know my face doesn’t show it much in the videos and photos, but I was thrilled to be a part of such a meaningful and auspicious occasion.  And with so many wonderful people! Alas, I think I suffer from RBF (google it ;).

Mana is a Hawaiian word for spiritual force akin to the Chinese term for qi / chi.  Some places & people have more mana than others, while nothing on this island so far has given me the heebee jeebies I have found some places that feel like they have more mana flow than others.  Take that as you please – it’s really difficult to describe in that ‘you have to be there’ kind of way.

I finally ventured “upcountry” which is up along the outside of the Haleakala volcano crater. It’s always cooler there and it’s where a lot of the farms are. The drive is impressive and breathtaking in both fun and scary ways.

I visited the much famed Ali’i Gardens and spent the rest of the morning checking out art colonies and out-of-the way places that my friends recommended. The drive was impressive and luckily the tuna can and I made it there and back.  I’m totally addicted to local Hawaiian food which is a mash up of a bunch of different cultures.  I stopped at the Pukalani Superette and grabbed some of the best local food I’ve had here – and it was super cheap too.  Win! 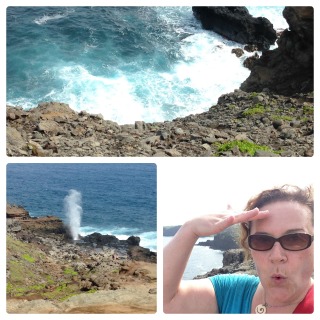 Yep, that’s what it’s called and I drove there windy roads, single lane bridges and all. The cliffs are impressive and downright scary. I started the hike down to get closer to the blowhole and my phone slipped out of my hand and bounced down the cliff side – luckily it landed before the next big drop into the ocean. Wheeewwff! I managed to crab crawl down v-e-r-y slowly and carefully to retrieve it. This is me after I got back up safely. —->

And here is a short video of the famed blowhole doing it’s thing.

This has to be one of my favorite places on the island so far – granted I have *not* been to 2 of the most popular places, Hana and the top of the Haleakala crater.  I went for a morning hike and ended up staying pretty much all day.  Keoneʻoʻio Bay is the end of the road past a very large beach park called Makena.  If you have a tough enough vehicle you can keep going on the trail/road but it will be very tough going over scrub and lava.  I hiked in and kept walking till I found a sandy bay to sit and have lunch.  I can’t put specifics to it but I just felt really good there, like time slowed down and I felt like I was supposed to be there.  The lava fields go all the way to the ocean and it’s a great place to fish.  I hung out with a family of locals that was fishing there. Evidently they had started catching fish when I showed up so when I got up to leave they called over and asked me to hang out.  I said sure – gimme one of those beers.  It was a really lovely afternoon and I’ll let the photos tell the rest of the story. 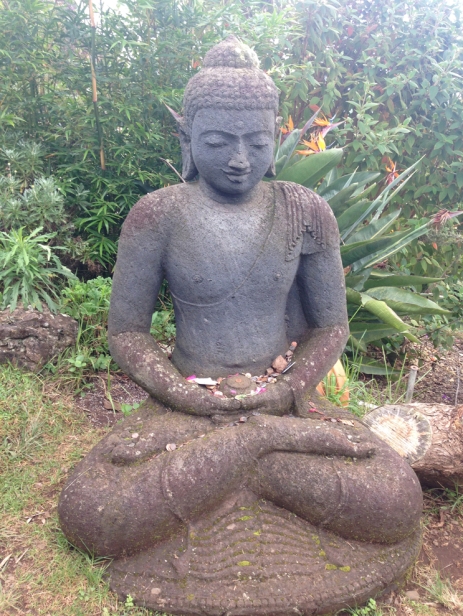 The mountains and lava fields. 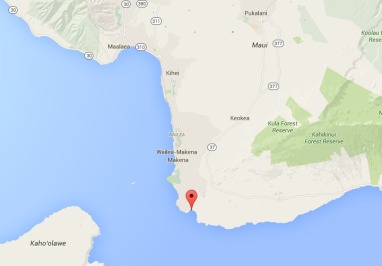 Island time is different than mainland time and especially the hopped up city time I was living on before I got here. Seems every time I look at my watch, I’m surprised that it’s earlier than I thought.  I want to post here more often but then I ask myself  “Do I want to document my experience or do I want to go and participate in the experience?”.  The answer of course is the latter.

Also, I’m up early working and I go to bed early.  A friend of mine here told me that 9pm is Maui midnight.  I totally get that.

I was driving back from a trip to Kahului a couple weeks ago and marveling at the clouds hanging along the mountains (ok volcanoes), the setting sun turning them canary yellow and the shoreline slowly coming into view and realized it right then & there: Dammit I love this place!

Here’s the funny thing – I’m not even a huge fan of heat and humidity has never been my friend (note the curly hair that acts as a hygrometer by the level of frizz).  Go figure. Weather here is pretty much the same daily 82 day / 70 night.

I’ve adjusted to island life, the slower pace, being in nature – not just observing it.  People assume I live here which is pretty amusing and I take it as a compliment.  Tourists ask my advice, people ask me for directions and shop keepers give me the kama’aina discount.  Kama’aina literally translates to ‘child of the land’ but colloquially, it  means you live here. I spoke with a ranger at a nature preserve this week and he assumed I was kama’aina too.  He told me that it was indeed a compliment.  If you are kama’aina you are caretaker of the land & peoples and that not all people who live here are kama’aina. So yay me! 🙂

(There’s much more but here’s a few for now…)

I started paddling with a outrigger club and am totally in love with the sport! After my first outing I was initiated with a short Hawaiian ceremony.  That was incredibly special. I just wish I’d started the week I got here. I’m really not very good at it but I am going to go out every day I can.   I’ve seen flying fish, rainbows and plenty of honu (sea turtles) from the boat. It’s just the start of whale season so we take a device that we can drop in the water to listen for whale song.  So far nothing – but a girl’s got to hope eh? Just getting out in the boat is amazing and the guys I’ve been paddling with are great.  It’s quite a task to paddle through the waves and yes, it can be a bit scary but I totally love it. Why did I have to fall in love with a sport that’s not done too many places besides here?

More pics of living, working, eating and adventuring here on Maui. I’ll catch you up on my favorite place on the island (so far) in the next post.  Yeah, I’ve found my “happy place” and it’s here on Maui. 😉 Also, there is SO much more to explore… 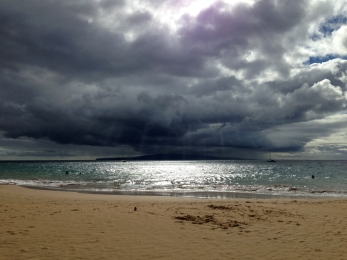 Dramatic view from the beach in Kihei 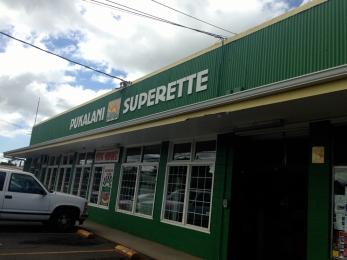 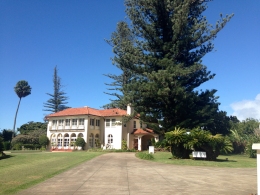 This is in my friend Satisha’s backyard. This aqueduct goes through the mtns.